Candles have for years been an integral part of every home's furnishings because of the source of light they provide, but for the past several years their purpose has changed significantly. They have become a basic element of decoration, which will look nice on countertops or cabinets, but also will have a wonderful scent spreading throughout the room. As a result of growing popularity of candles made of plastic such as paraffin, their ecological substitutes appeared, such as candles made of soy wax, bee wax or coconut wax, which were created out of concern for the environment and their wax quality does not differ from their "artificial" predecessors.

Natural wax candles are free of substances that can be harmful to human health because they are made from naturally occurring products. Paraffin wax is a substance derived from petroleum and is released during petroleum processing. It is used in cosmetic industry, heavy industry and for candle manufacturing, although in recent years its use has been decreasing due to greater consumer awareness. Paraffin, despite good chemical properties (high melting point) and low price, releases toluene, benzene and formaldehyde, which are carcinogenic and may cause laryngeal and pulmonary edema, dizziness, irritation of mucous membranes and even loss of consciousness.

Unlike paraffin wax, natural waxes are biodegradable and do not contain heavy metals or other components released during combustion that can harm human health - so they are suitable for vegetarians and environmentally conscious people.

Soy wax is a product of plant origin obtained from soybean oil, which is produced by pressing soybean seeds. Soy wax candles can be described in a few words - they are safe, eco-friendly and efficient. Soy wax is superior to paraffin wax in several ways:

Coconut wax is obtained from coconut pulp and is fully biodegradable. It has a low melting point, so just like coconut oil, it melts on contact with the human body, so hot water and soap is all you need to remove dirt. A coconut wax candle burns slowly and without smoke, leaving an aromatic scent that coconut wax conducts very well. It is a good alternative to soy wax.

This is what the first candles were made of. Beeswax is efficient and burns slowly without leaving soot - it is also the only one capable of neutralizing airborne toxins. Its greatest characteristic is its delicate, honey-like scent, which blends perfectly with floral notes, vanilla or chocolate. Unfortunately, it is not a product suitable for vegans because it is obtained from the wax glands of bees and is used to build combs.

Rapeseed wax is common and readily available as Poland is the third largest producer of rapeseed in the EU. Canola wax candles will be ideal for local industry advocates and vegans, as it is a plant-based product and completely biodegradable. Due to its smooth structure and low melting point, rapeseed wax releases fragrances well and does not cause smoke. 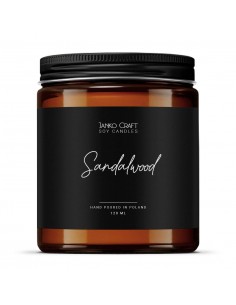 Janko Craft
jc5
7 Reviews
zł39.00
Sandalwood candle is an oriental sandalwood scent that offers the luxurious promise of a relaxing evening. A smoky herbal scent is combined with a delicate sweetness. Warm vibes tremble in the air, illuminating the space. Our soy candle with a wooden wick that blends perfectly with sandalwood will guarantee you moments of relaxation. Capacity: 120ml... 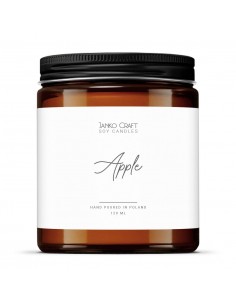 Janko Craft
jc25
1 Reviews
zł39.00
Close your eyes and imagine that you are standing on the edge of an orchard. Everything is covered in cold dew. Old, towering apple trees spread out their branches and stretch their leaves toward the rising sun. The sun's rays carefully caress the luscious fruit. Sweet, crisp, subtly sour. Simply perfect. Apple soy candle reflects this extraordinary... 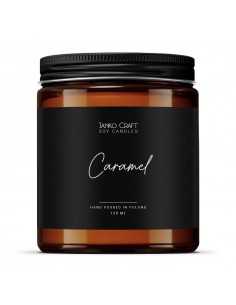 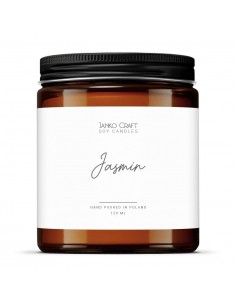 Janko Craft
jc17
3 Reviews
zł39.00
Soy candle has a distinctive, extremely intense aroma. Full of sweetness jasmine scent has extraordinary power. It has a calming, relaxing and antidepressant effect. Experience this unique scent of flowers and let yourself relax with our Jasmine Soy Candle. Its base is natural soy wax and a wooden wick. Capacity: 120ml Burning time: ok. 30h Wax: 100%...